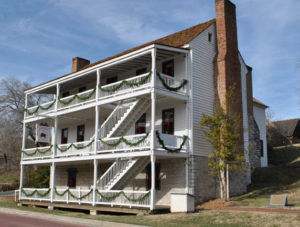 Defying time that has touched so much with ruin, the stately historic Netherland Inn rises high above the Holston River. From the 1760s travelers came by wagon down the Island Road to the river bank where they built boats and migrated west. Originally built by William King in 1802 and 1808 for the sole purpose of developing a boat yard from which to ship his salt, the Netherland Inn was later sold at a sheriff’s sale in 1818 to Richard Netherland. Netherland immediately procured a stage contract and established this beautiful three-story building as an inn and tavern on the Great Old Stage Road, the main route to Western Kentucky and Middle Tennessee.

The Netherland Inn became established as a popular stagecoach inn hosting many famous persons including Presidents Andrew Jackson, Andrew Johnson and James Polk. Netherland Inn remained in the Netherland family until 1906 when it became the home and boarding house of H.C. and Nettie Cloud. In 1968, it was purchased by the Netherland Inn Association to be preserved as a historic house museum. The inn today has been furnished to represent life as it was in an important American frontier settlement. Research was collected from the diary of Richard Netherland, as well as other primary and secondary history sources. The first floor tavern, second floor family quarters, and third floor guest rooms all have been furnished with period pieces. Open Saturday and Sunday – May through October Hours: 2p.m. to 4p.m. Group Tours: April through October by appointment- School, Civic and Church Groups Welcome!