About The Netherland Inn

The preservation of the Netherland Inn began in 1968 when the Inn’s old dead vines were removed along with the deteriorated porches. Extensive detective work accompanied the careful and laborious “peeling off” of surface materials. First the stabilization of the structure was accomplished. Tedious digs in the back of the building uncovered foundation walls and two fireplaces of the long-obliterated kitchen wing. The research for historical “truths” of the original building necessitated the slow process of minute inspection as work proceeded.

An original shingle was found which made it possible to have the new roof covered with exact copies of original shingles. So it was also with the areas of original siding, made of heart poplar, which had to be discarded because of vines preventing its clean removal. Exact copies were milled and grooved of yellow poplar and put in place.

The entire second and third floors of the Inn are filled with hand-fired brick infill (nogging) between the outside siding and interior plastered walls. The very large framing and roofing timbers were match-marked with Roman nu-merals by a master carpenter who cut, fitted and marked them on the ground before they were put in place.

The Inn’s original porches on the front extended the full width of the building and the stairs were on the outside. Bannistered stairs were built inside about the time of the Civil War.

The stately structure rises three stories. The ground floor level is walled with large hand-cut limestones and the chimneys are of the same material finished at the upper levels with hand-fired bricks. The interior paneling and woodwork honor the frontier “country carpenter” and early craftsmen who were influenced by a Federal style of architecture.

The restored Inn will have seven fireplaces, thirteen rooms, two large central hallways, and a full garrett. The two-story, log kitchen wing with its galleries will be faithfully rebuilt on or near original foundations.

The number of original outbuildings which fill out this 19th-century Boat Yard scene are:

THE STABLE, necessary for an Inn to obtain a stage contract, was a large, sturdy, three-story, stone and frame bank-barn which could be entered from the ground at two levels.

An ample SMOKEHOUSE, and the old “OAKEN BUCKET” WELL were necessary items for the house-hold.

Three of the Netherland’s SLAVE CABINS will be re-constructed. Many descendants of these slaves live in East Tennessee today.

The large log WAREHOUSE will exemplify one of the old King’s Boat Yard warehouses that existed on this property as well as the many which lined the river in the early village.

The WHARF will tell the exciting story of the activity which went on at this very spot when used by King’s agents and by the Netherland family for a loading point for the many FLATBOATS. It once even welcomed the steamboat, Cassandra, from Knoxville.

The restoration aims to capture the excitement, charm and tangible evidence of a glorious history and to become one of the most visited historic sites in America! 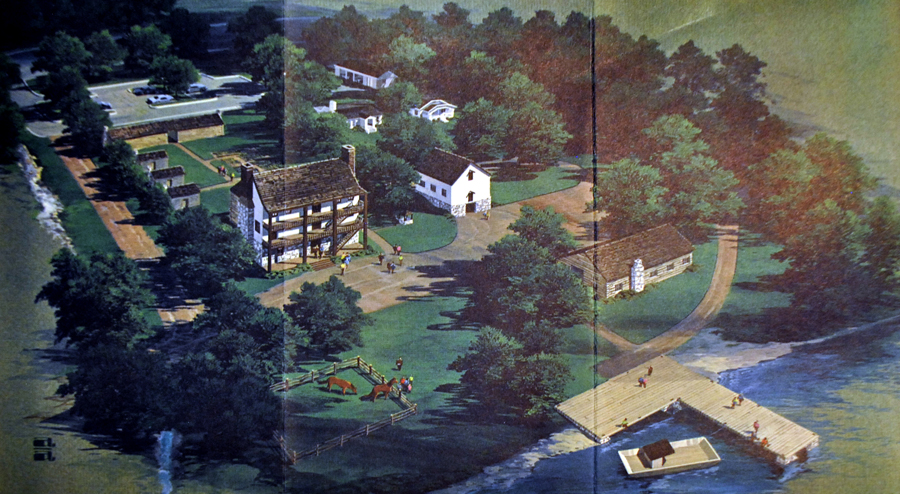