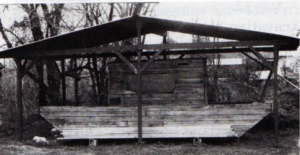 The Charlotte flatboat and two other flatboats were used to re-enact the 1779 Donelson Flotilla which left the banks of the south fork on the Holston River with thirty families that wanted to settle in Middle Tennessee.  The four month journey included Col. John Donselson’s daughter, Rachel, who later married Andrew Jackson.

As a part of the 1976 Bicentennial, the state of Tennessee sponsored the 1,006 mile river flotilla, with flat boats to resemble the original 1779 flotilla.  The 1976 historical event is documented in a book namedAdventures II along with their logbook being part of the Tennessee Archives. This 1976 voyage took nine weeks with the launch site being in front of the Netherland Inn.  James Caldwell, coordinator for the event, conducted a slide presentation on July 13, 2013 in the Schoolhouse at Netherland Inn of this adventure.  There were celebrations on the journey at 42 locations along the 1,006 mile event.  One stop at Pickwick Landing had 26,000 people in attendance.

The Charlotte was dismantled in 2014 due to its deterioration and safety hazard.