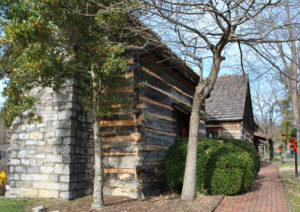 The Boone cabin also serves as a children’s museum. “In 1979/80, this cabin was carefully dismantled and moved from beside the Kentucky wilderness road in Duffield, VA and reassembled here on the foundation site of the Netherland slave cabin, home of a beloved slave, Jordan Netherland and his wife Jane Lynn. This was the 1773-75 home of Daniel & Rebecca Boone and later the Ephraim Fraley home. It is a fine specimen of the typical early pioneer log architecture of the region.” Donated by Jerry Legg and preserved as a children’s museum by the Hal Spodens, a memorial to their 5-year-old grandson Jeremy H. Honeycutt (1973-1978.) Entirely restored by volunteers. Preservationist: H.T. Spoden, P.E. MCS